The 8 Best Places to Celebrate St. Patrick’s Day in Virginia! 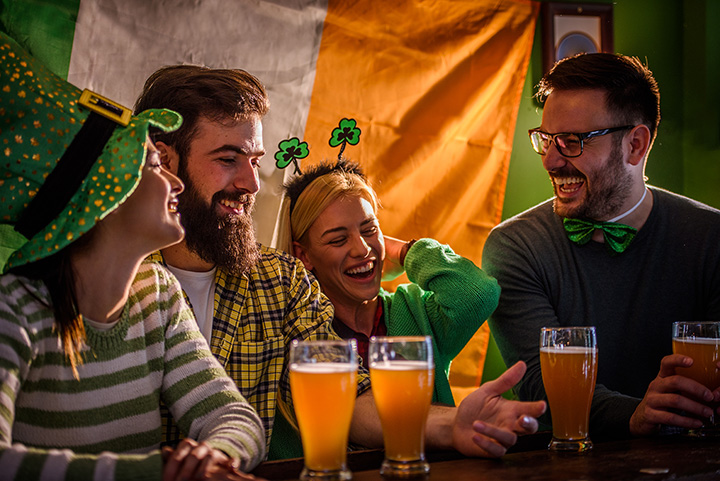 St. Patrick’s Day: A holiday to honor the foremost patron saint of Ireland—Saint Patrick. It’s a holiday where we honor Irish heritage: The food, the music, the culture itself. And in Virginia, we sure know how to party. Enjoy a day accompanied by bag pipes and traditional Irish cuisine. And most of all, have a tall glass of beer. What’s not to like? With a little luck of the Irish, and these 8 places to celebrate St. Patty’s Day, you’re sure to have an experience to remember.

Take part in the Annual St. Patrick’s Day Parade in Norfolk, Virginia, which has been running for five decades. The parade starts at 10 a.m., and is followed by an After Parade Party featuring live bands and food. Participants dress up in traditional Irish garb, decorate their vehicles with shamrocks, and, of course, wear lots and lots of green!

Shamrock the Block is a huge block party that takes over a major downtown street in Richmond, Virginia. The party starts at noon and ends at six, and is free to participate in. The kid's area has face painting, games, and more. Live bands and tons of food & drink tents make this the place to be in the Richmond area.

For all your Roanoker's out there, the St. Patrick's Day Parade and Shamrock Festival is calling your name! The parade starts around 10 a.m. If you're not the parading type, don't fret. The Shamrock festival offers live music, food, and plenty more. Come on out and enjoy the festivities!

The Yuengling Shamrock Marathon Weekend is a Hampton Roads staple. With four separate marathons, including a half marathon and 8K, there are opportunities for everyone to get in the Irish spirit. 25,000 runners from all 50 states and outside of the U.S. come to participate. Live entertainment, food, and Yuengling beer are available throughout the weekend.

Murphy's Grand Irish Pub in Alexandria, Virginia, has never gotten away from its Irish roots. Nightly Irish music and entertainment creates the ambiance one would want while enjoying traditional Irish dishes. You can imagine that St. Patrick's Day is their premier holiday. With plenty of live music, Irish dancing, delicious Irish cuisine, and other classic St. Paddy's shenanigans, it's no wonder why!

Staunton, Virginia, celebrates St. Patrick's Day by recreating a traditional Irish game from the old country. Bowling teams consist of three to four players. Participants and onlookers are encouraged to dress up in green and costumes. After the event, the festivities continue at Queen City Brewing for beer, food, and good times.

Live Music. Bagpipers. Beer. Oh, so much beer. All that and more is on tap for the week-long PaddyFest at Keagan's Irish Pub in Virginia Beach's Town Center. The festivities kick off with live entertainment, and then a Keg & Eggs event which leads up to the famous St. Patrick's Day celebration. You won't want to miss a second!

And if you're still in the Virginia Beach area and are looking for some pub crawling, head to the Ocean Front for the sixth annual LepreCon. It's free to join, but participants must be age 21 and up and are encouraged rto wear their best St. Patrick's Day outfit. Check their Facebook page regularly as they add new stops to the list.