The 10 Best Breweries in Virginia! 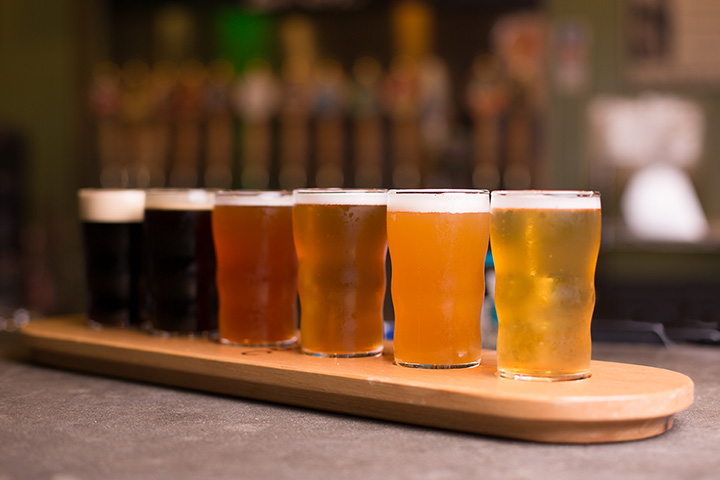 Over the last 10 years, award-winning homebrew spots have opened up across Virginia, causing craft beer trails to crop up from the Blue Ridge Mountains to the Coast. Narrowing down 10 of the best tastes and experiences out of more than 120 now open in Virginia is no easy task, but luckily we’re more than up for this drinking challenge.

Devil’s Backbone Brewing Company is one of the most well-known and respected breweries in the state, with its purchase by the publically traded Anheuser-Busch InBev currently pending approval at the U.S. Justice Department. Since opening in 2008, they’ve won over 15 awards from the World Beer Cup and Great American Beer Festival. Whether you’re visiting the 15,000-square-foot taproom, called “The Outpost” in Lexington, Virginia, or their original Roseland location, you’d do well to try a Schwartz Bier, their signature German-style black lager. Devil’s Backbone organizes and sponsors regular community events, including live music, fun runs, and Cards Against Humanity nights.

Starr Hill Brewery opened in Charlottesville, Virginia, in 1999 in the historic Starr Hill Music Hall. Since then, it has moved to neighboring Crozet and, in addition to regular live music, has taken home 22 medals from the Great American Beer Festival, World Beer Cup, and the Great British Beer Festival. Over 28,000 barrels are brewed each year and are delivered throughout the Mid-Atlantic and Southeast regions. Star Hill offers seasonal beers and limited releases, but the core lineup consists of the Northern Lights IPA, Grateful American Pale Ale, The Love German Hefeweizen, JOMO Vienna-Style Lager, and Double Platinum Imperial India Pale Ale, available year-round.

Blue Mountain Brewery opened in 2007 but has already made a name for itself as a World Beer Cup and Great American Beer Festival medal winner. All Blue Mountain beers are brewed, bottled, canned, and kegged at their Afton facility, or at the new Blue Mountain Barrel house in close-by Arrington, Virginia. Ten brews are on draft every day and are paired with a local food menu. Visit the on-site hop farm before stopping in to the tasting room for a brewski and lunch from their full restaurant menu.

Legend Brewing in Richmond, Virginia, is the oldest and largest brewery in the state. Legend offers lagers and ales, a rarity in the area. The 1994 tasting room and pub has grown into a 180-seat restaurant with a deck and beer garden. Legend is an awards powerhouse, including the Best of 2016 by Richmond Magazine Reader’s Choice Award.

The Young Veteran’s Brewing Company in Virginia Beach, Virginia, celebrates the area’s large military community. Founded in 2012 by, you guessed it, young veterans. The brewery has already expanded to triple the size of their original capacity. Everything from the taproom décor to the names of the beer is military themed. We recommend a flight so you can try multiple flavors at once, but if you could only choose one, go with the Pineapple Grenade.

If you’re from Virginia or Tennessee, you may have already tried a Wolf Hills beer. But if you haven’t, make sure to order one next time you’re out: it might be your only chance. Wolf Hills takes pride in brewing small batches of each beer, which allows them to focus on freshness. The results speak for themselves, as Wolf Hills is a five-time award winner.

Lost Rhino’s founders traveled across the United States to sample the best beers and learn the greatest brewing techniques before opened their own company in Ashburn. The result is an intensely personal brew that remains true to their Virginia roots. More than any other brewery, Lost Rhino sources ingredients directly from Virginia farms. Rhino Chasers, an award-winning hoppy pilsner, is their signature beer, but their taproom has their six year-round flavors, seasonal, and limited releases available, along with a full restaurant menu.

Virginia Beer Company in Williamsburg, Virginia, turns one-year-old at the end of March, but it’s already gaining nation-wide recognition. The online magazine “Beer Advocate” named them one of the 34 Best New Breweries in the United States last year, citing their four flagship beers as exemplary. Jonathan Newman, the brewmaster, is excited to continue working on experimentation in the coming year, having honed his skills developing a new beer every week for the last one, including a molasses wheat beer for the Virginia Historical Society. Their most recent beer sold out in 24 hours, so expect to see more Virginia Beer Company brews coming to a bar near you.

The James River Brewery in Scottsville, Virginia, won first place for Best of Show and for their British bitter beer, Runner ESB in the Virginia Craft Brewers Cup last year, not bad for a brewery founded not long ago. The James River Brewery pays homage to the river where it got its name in its logo, setting, and names of beers. Stop by for live music, open mic nights, and trivia in the taproom, once a 19th century brick tobacco warehouse. The James River crew adheres to “the spirit of ‘Reinheitsgebot,’ (German Beer Purity Laws from 1516) in that nearly all of [their] beers contain only malted grains, water, yeast, and hops.” That means you won’t find flavorings or caffeine in most of their brews, but when they taste this good you won’t miss it.

946 Grady Avenue, Charlottesville, VA
About Us:Originally, the Three Notch'd Road was a colonial-era thoroughfare running east and west through central Virginia. It is believed to have ... Read More

1110 Alverser Drive, Midlothian, VA
About Us:Extra Billy was the nickname given to William Smith, twice elected Governor of Virginia in 1845 and again in 1863. He earned the name "Ext... Read More

1717 Oak Lake Boulevard, Midlothian, VA
About:We are brewer-owned and consider everyone who walks through our doors to be family. We are inspired by the desire to celebrate the end of a l... Read More

9519 Critzers Shop Road, Afton, VA
About Us:Opened in 2007 as the first brewery in Nelson County, Blue Mountain Brewery is a unique destination in the heart of Virginia's Blue Ridge ... Read More

495 Cooperative Way, Arrington, VA
About US:Opened in 2007 as the first brewery in Nelson County, Blue Mountain Brewery is a unique destination in the heart of Virginia's Blue Ridge ... Read More

2277A Dabney Road, Richmond, VA
Neil Burton, the founder of Strangeways Brewing, has always had a penchant for exploring the unknown, especially when it comes to beer. As a result... Read More

1715 Summit Avenue, Richmond, VA
Isley Brewing Company is the true definition of microbrewing. Owned by Richmond native Michael Isley, the brewery opened its doors on October 26th,... Read More
Show More
Select a Virginia town to find
the Best Things-To-Do and Places To Go around you